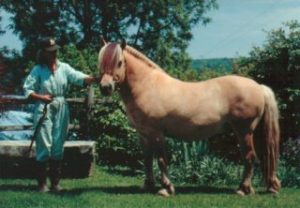 Ring was imported in utero by Mr. Harold Jacobsen, one of the earliest importers of Norwegian Fjordhorses. His dam Laila was well known in Norway as a champion trotter. His Sire Apollo was a well-bred stud who lived to be about 40 and is reputed to still be servicing mares even in his later years. Although considered small (13.1 hands) by today’s standards, Ring had many positive attributes, including a beautiful, typey head, a wide chest, large, hard hooves, and strong bone. Perhaps his most outstanding trait was his temperament. Never pushy, he never bit or kicked and would stand patiently for mounting, even in the middle of a field with no tack. He definitely passed his temperament on to his offspring, who became know for their great work ethic. Two of his sons, full brothers to our geldings Mogan and Vidar, helped pull Dave McWethy’s wagon cross country, and Dave tells us that they were always willing to give what was asked of them.

By the time he reached his 30th year, his teeth were pretty well worn down, and it became hard to keep weight on him, especially given the long, cold winters we get around here. Out of respect for this wonderful stallion, we opted to have him humanely euthanized. He is buried here on the farm adjacent to the two wonderful mares, Mirabelle and Gitane, that, with Ring, became the foundation of the herd we keep today. Ring left many registered offspring and many fond memories.