As the full-time farm manager, now with Jubal as Co-manager, most of Norma’s time is taken up by maintaining the goat herd, the Norwegian Fjord horses, sugaring, producing and picking blueberries, and keeping up the grounds of the farmhouse and the vacation rental houses. 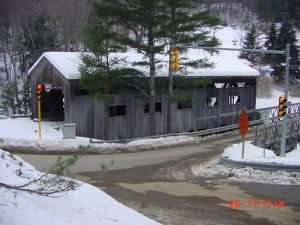 Previously, Bill Chaired the Charlemont Historical Commission, and during that time was very active with Norma and others in a long term effort to conserve the Bissell Bridge, the last covered bridge in town. The bridge, now listed on the National Register of Historic Places, was slated for demolition by the Massachusetts Highway department. While MassHighway had indicated that they were willing to build a new covered bridge, there were many in town who felt that this would be another step in the Disneyfication of America. Our preference was to have the historic bridge rehabilitated so as to carry modern loads. After many years of fighting to save the bridge, in June of 2003 the Board of Selectmen agreed to ask again for the bridge to be rehabilitated. To the great satisfaction of many 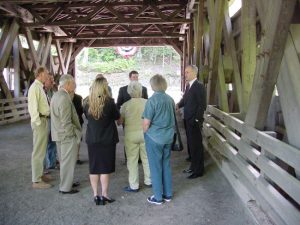 local folks, and to the surprise of many, the Massachusetts Secretary of Transportation, Dan Grabauskas and the Commissioner of MassHighway, John Cogliano AGREED. Subsequent to this, MassHighway hired a very capable engineering firm, Fay, Spofford and Thorndike, to complete another structural analysis and design a plan for rehabilitation. As the supporters of rehabilitation had been saying all along, it did prove feasible to rehabilitate the bridge to carry modern loads without destroying it. We were pleased that MassHighway opted to hire the firm of Northern Construction to do the work. Please visit the Bissell Bridge photo gallery for shots we took at various steps in the rehabilitation. 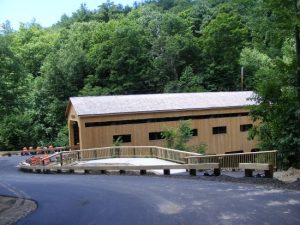 After being closed to traffic for many years, the bridge is open and carrying vehicles. It is currently the only, two-lane timber covered bridge in Franklin County that is open to all legal vehicle loads. The engineers even agreed with our idea of building an observation deck that gives passers-by a great view of the bridge.
For many years, Norma also served as a member of the Board of Directors of the Franklin Land Trust, a locally-based non-profit group dedicated to preserving open, agricultural land in Franklin County. Over its lifetime, FLT has successfully conserved over 30,000 acres of prime farm land throughout the county.

Previously, Bill was also a member of the initial Charlemont Agricultural Commission.