Our History and Philosophy

Like many people in our age group, Norma and I were brought up in a time of seemingly unlimited resources and opportunity, dramatic increases in our standard of living and incredible advances in the fields of science and technology. Prior to such pivotal historical events as the war in Viet Nam, the civil rights movement, the Kennedy and King assassinations and Watergate, we also were, in retrospect, very trusting and naive.

However, our experiences in the late 60’s and early 70’s (we first became a couple in the winter of 1969) did a lot to open our eyes to many facts of life at the time. We learned that one can’t believe everything (anything??) the government or the media tell you; that many corporations large and small can not be relied upon to look after the well being of their workers or the environment; that many resources are not unlimited; and that this wonderful planet can be hurt, and even rendered uninhabitable by human activities. Many of these same questions and issues still resonate today.

For example, although I was born in Providence, RI, (the younger of two sons of first-generation Italian-American parents) I spent summers from an early age along the Rhode Island seacoast near Pt. Judith. I recall fondly many hours in and on the water, fishing, swimming, surfing, diving and sailing. Many times I’d come home with lobsters from our own traps, or striped bass caught either on road and reel or by spear gun. I still clearly remember one time when some friends and I were diving off the shore at Point Judith, R.I., and we dove into a huge school of bass that were feeding on bait fish. Although visibility was limited, it was still possible to see that the bottom was literally covered with stripers of all sizes. Although it’s not easy to dive to the bottom in 20 feet of water, and accurately hit anything, the hardest part was deciding which fish to take a shot at they sped by, and actually bringing home a fish wasn’t a sure thing. Nonetheless,we knew by seeing, that the striped bass fishery was in really good shape.

Not so later, due to overfishing by commercial fishing boats and sport fishers that could catch entire schools. I still remember my sense of general unease when the local paper would print a photo of a group of sport fishermen who had caught over 200 bass, and I wondered how on earth they would ever clean and eat so many fish. My first loss of ecological innocence came from an eventual realization that what had seemed once like unlimited stocks of striped bass were, in fact, declining, partly due to commercial and sport over fishing, and partly due to contamination of the Atlantic Ocean

I credit this experience, my several years as a member of the Boy Scouts of America, and my reading of the Rachel Carson books “The Sea Around Us”, “Under the Sea Wind”, and “‘Silent Spring” with my love of the outdoors, and with helping me form a clear sense of the importance of conservation.

Norma (born in the Bronx, New York, the only child of first-generation Portuguese/Spanish-American parents) is the product of a different set of formative experiences. First, her Portuguese Grandfather had been a farmer in Pennsylvania after emigrating to the US. Although she was not yet born, Norma remembers family stories of this experience, particularly her Mom telling her that the only time she ever saw Norma’s grandfather cry was when his beloved work horse died. Also, while living in New York City when the South Bronx was still composed of livable, vibrant, multi-ethnic neighborhoods, her grandmothers would take her almost every weekend to either the Bronx Zoo, or the Museum of Natural History. She credits these experiences with developing her love of nature and animals and her attraction to the lifestyle of farming.

When we first became a couple, we settled in what had been my home, a small, rustic cabin in the woods of Southern Vermont. I’m not exaggerating when I call it rustic as it had no electricity, no running water (at least initially), an outhouse, wood heat, and a wood cookstove, and was on a rough gravel road that for the first three winters until our son was born, wasn’t plowed.

Although we both worked multiple jobs for money, our first five years together were as “neo-homesteaders”, raising organic vegetables, chickens for eggs, goats for milk, and a hog or two, and “putting food by” the way our grandparents had done. It was during this time that we worked with local small farmers Mandy Trevarro and Bill and Dot Holland and learned about farm machinery, raising animals, and how to make hay, and maple syrup. These were literally some of the best years of our lives, and helped solidify our love of nature, and our commitment to producing our own food, to building up the soil and otherwise improving the land.

After saving our money, and with the help of both our families, we were fortunate to find the beautiful piece of land on which we have lived for the last 44 years. The driving concepts behind Blue Heron Farm have been and continue to be: small-scale, diversified, and low input/sustainable. As is evidenced by the improvements we have made over the years in the farm’s fertility, the condition of the buildings, miles of new fencing, countless boulders removed from the mowings, etc., we are both firmly committed to leaving this farm in better condition than when we found it. It’s heartening to know that our son Jubal, who, aside from several years in California, has lived and worked on this land for most of his whole life so far, and is equally committed to improving and maintaining the land into the future.

In 2012, we took steps to permanently protect the farm from development by placing an Agricultural Preservation Restriction (APR) on most of the property and a Conservation Restriction (CR) on the rest so that it can never be developed. In 2014, we commissioned a 10,000 kW Photo-voltaic (PV) system on the farm with partial grant support from both the Mass. Department of Agricultural Resources (MDAR) and the United States Department of Agriculture (USDA).

We welcome visitors to share in the beauty of the place we have come to love so much. 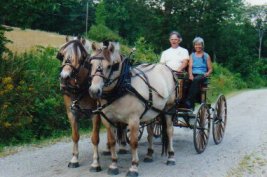