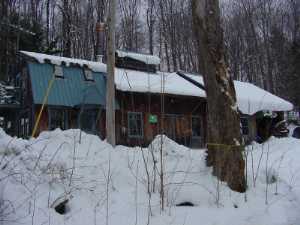 The farm’s main crop is between 600 and 1,000 gallons of Baystate Organic Certifiers USDA Certified Organic Pure Maple Syrup. Sap is collected each year from 4,000 taps and boiled to perfection in a wood-fired, 5′ x 14′ stainless steel evaporator in the sugar house we built in 1986. In our part of the state, the sugaring season normally occurs in March, and sometimes extends into early April. In some past years, we have tapped and boiled as early as the first week in February, or as late as the end of March. Although the sugaring pipeline stays up year round, each year we drill new tap holes (as far removed from previous ones as possible) to insure a good flow of sap if weather conditions are favorable.

All taps set by the farm are on a food-grade tubing and consist of small diameter spouts that are better for maintaining tree health. The operation was upgraded in 2003 by addition of lead free, cross-flow syrup pans, a new, lead-free packaging system, a pressure syrup filtration unit, and a reverse osmosis (R.O.) machine and again in 2020 with a new, lead-free sap preheater.. 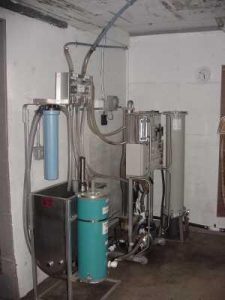 The R.O. Machine dramatically reduces the boiling time by extracting water molecules. is a device that mechanically removes some of the water from the pure maple sap by pushing the sap through a special membrane that has holes large enough to allow water molecules through, but not the larger sugar molecules. The R.O. allows us to dramatically reduce the amount of boiling time needed to make syrup. To illustrate, sap right out of the tree varies in sugar content from tree-to-tree and from year-to-year. In most years, sap has an average sugar content of around 2-3%. Using the “Rule of 86”, if one starts with sap that is 2% sugar, then 43 gallons of water (86 ÷ 2 = 43) must be evaporated to make one gallon of “standard density syrup” (66% sugar-the remainder is water, minerals and other naturally occurring plant compounds). However, after one pass through the R.O. machine, sap can be concentrated up to 10% sugar. Doing the math shows that one need only evaporate 8.6 gallons of water to make that same gallon of standard density syrup if starting with sweeter sap. Use of the R.O. machine has meant that we now burn about 5-6 cords annually of slab wood (waste product of sawmills) rather than the 35-40 cords we used previously. All tubing is cleaned at the end of the season by using vacuum to draw a food grade Hydrogen peroxide and acetic acid solution through the tubing.

In 2020 we replaced over 7,500 feet of 5/16/in. sap tubing that had outlived its useful period. We also are now replacing all spouts on an annual basis.